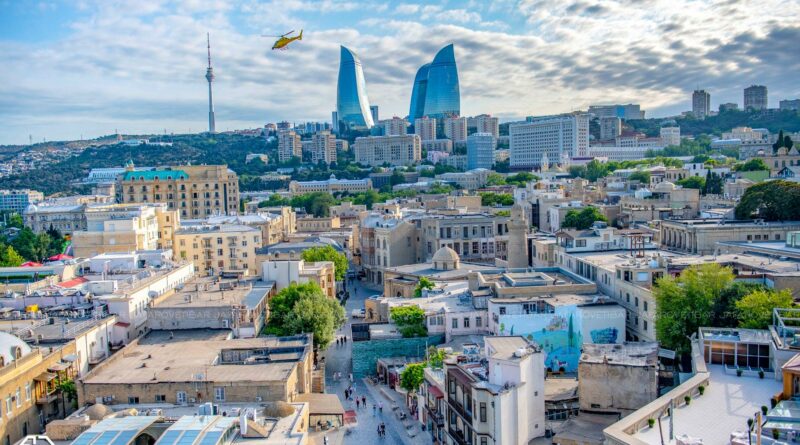 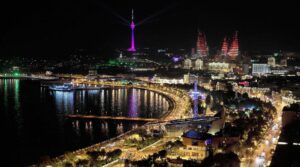 Baku – the city between East and West. Azerbaijan’s capital city is well-known for its unique architecture shaped by many cultures throughout its history. Located on the shores of the Caspian Sea, this metropolis has long been one of the centers of arts and trade. Until the mid-19th century, the city consisted of medieval palaces, mosques, bathhouses, castles, towers all located within the stone walls overlooking the sea. The cityscape was very oriental with narrow streets and crowded bazaars scattered across the fortified city. 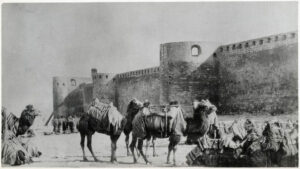 With the occupation of Baku by the Russian Empire in 1806, a centuries-long medieval establishment came to an end. For the locals it was a full-scale tragedy, but for newcomers it was new opportunities.

Russian rulers were aware of the oil reserves around Baku and there was a need for economic stability in the world’s largest state. Starting from the late 1840s, Baku was in the center of attention of the imperial house. In 1846, the world’s first oil well was drilled with percussion methods in Bibiheybat, one of the suburbs of Baku. This was a major milestone in the global oil industry. But this was also a new beginning in the history of Baku. 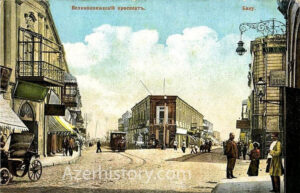 With the arrival of thousands from across the Russian Empire, as well as European states in Baku, the city went under major transformation in order to meet the housing needs of the newcomers. The city was growing and oil barons were starting to appear in the city thanks to the oil industry.

From the 1860s, the new streets with European-style houses started to appear outside the city walls. Baku was growing drastically with the city limits expanding from the seaside to the west and north. 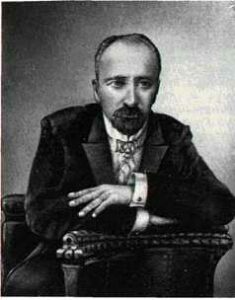 Josef Goslawski was born in 1865 in the Warsaw Governorate, but in fact, his entire creative life was spent in Baku. He came to Baku in 1891 after graduating from the Saint Petersburg Institute of Civil Engineers.

Goslawsky was supposed to oversee the construction of the Alexander Nevsky Orthodox Cathedral which after its construction became the largest Orthodox church in the South Caucasus.

In 1892, he was the appointed chief architect of Baku. not for the work of Goslawsky, the cathedral might not have been built. From this moment – from the beginning of the 1890s. the formation of professional architecture began in Baku. And the very first creative steps of Goslawsky became important milestones in the history of urban construction in Baku. 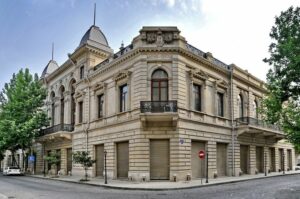 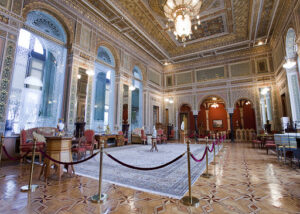 From 1892 to 1902 he worked on the construction of the Taghiyev Palace with a beautiful interior and facade on Gorchakovskaya Street (Taghiyev Street). In 1893-1895 he constructed a villa in Mardakan again for the same famous philanthropist. Taghiyev in general greatly influenced the work of Goslawsky.

In 1899-1900 and 1904 together with the engineer (architect) Kognovitsky, Josef Goslawsky participated in the restructuring of the Taghiyev Theater, which was built in 1883 (later, the Azerbaijan State Theater of Musical Comedy was located on the site of the dilapidated building demolished in 1988). In 1898-1901. Goslawsky built the first Muslim women’s school in the world on Nikolaevskaya Street (Istiglaliyat Street) of Baku. In 1896, a building for the Tagiyev School of Agriculture was built in Mardakan according to his project.

In 1904, the building of the Baku City Duma was completed (in Soviet times, the Baksovet, later the Baku City Hall). Unfortunately, he did not see the end of construction. He died in 1904 of tuberculosis. 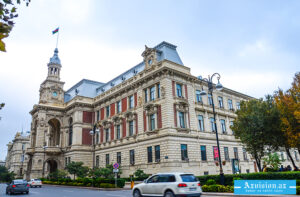 Until 1902 the Goslawsky family lived on Tserkovnaya Street (Vidadi Steet). Then they moved to a neighboring street. In 2006, by the decree of President Ilham Aliyev, on the wall of house number 11 on Mirza Ibrahimov Street, a memorial plaque was installed.

It is important to highlight that the opening ceremony was attended by the wife of the former President of Poland Lech Kaczynski, Maria Kaczynska. 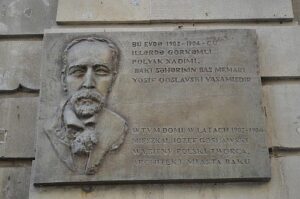 A memorial plague in the house of Goslawsky 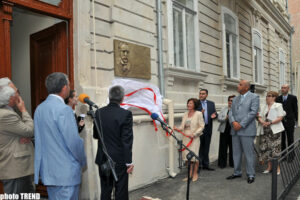 Maria Kaczyinska in the opening ceremony of the plaque

The legacy of Goslawski has continued for decades thanks to his compatriot Ploshko.

Josef Ploshko was known as a great stylist: his taste and sense of style were simply amazing. He graduated from the Saint Petersburg Imperial Academy of Arts and worked in Kyiv for two years. In 1897 he was invited to Baku by his compatriot Josef Goslawski, who was the chief architect of Baku. He designed public, civil, and residential buildings, as well as religious structures. In terms of style, he used the elements of European Classicism, high-class Venetian and French Gothic, and, of course, Art Nouveau (Art Nouveau), which came into fashion in the 1890s. It flourished at the beginning of the twentieth century, and the elements of this particular style were most successfully used by the Polish architect. 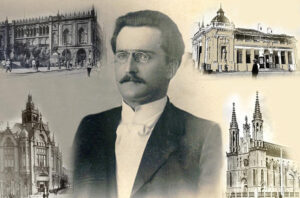 Ploshko’s first monumental work in Baku is Ismailiyya, a building built in 1908-1913. by order of Musa Naghiyev in memory of his son Ismail who died of tuberculosis. Many historians believe that Ismailiyya was inspired by the Doge’s Palace in Venice, in fact, in the design of its facades, the influence of the Venetian palace Ca-d’Oro („Golden House”), a prominent representative of the Venetian Gothic style of the 15th century, is noticeable. 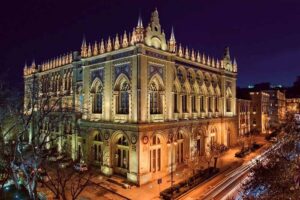 Another significant work of Ploshko is the Mukhtarov Palace (later – the Palace of Happiness), built in 1911-1912. commissioned by Murtuza Mukhtarov, a well-known oil industrialist and millionaire. The prototype of the Mukhtarov Palace was a house in Berlin, located on Rosenthalerstrasse Street. There is an opinion that Ploshko proposed to Mukhtarov to build a mansion in the national Azerbaijani style, but Mukhtarov wished it Gothic. 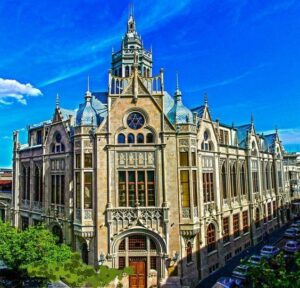 The Palace of Happiness

In 1910, the architect builds Haji Soltan Ali mosque in Baku, in the newly established neighborhood.

The Catholic Church of the Immaculate Conception of the Blessed Virgin Mary was built by Ploshko in 1909-1914. In Baku, it was called a “Polish church” – due to the fact that Poles predominated in the Catholic community. The church was built in a prestigious area of ​​Baku – at the corner of Merkuryevskaya and Kaspiyskaya (Azerbaijan Avenue and Rashid Behbudov Street respectively). This unique cathedral with the statue of Saint Marry carrying Jesus Christ had the biggest pipe organ in the South Caucasus. The Soviet government demolished the cathedral as part of the fight against religion. The barbaric act was carried out in 1931. 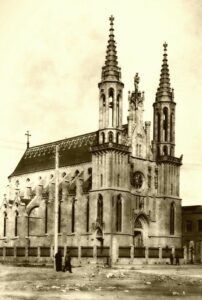 One of Ploshko’s last works was the six-storey hotel „New Europe”, built by order of Nagiyev using the latest technology on Gorchakovskaya (Tagiyev street).

Ploshko was one of those who shaped the image of modern Baku. And even if he was the author of just one building – either Ismailiyya, or Mukhtarov’s Palace or a church, his name would be worthy to remain imprinted in the history of Baku. 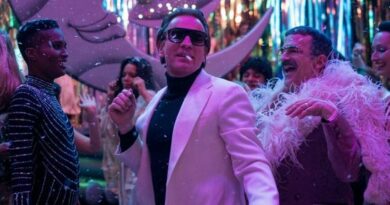 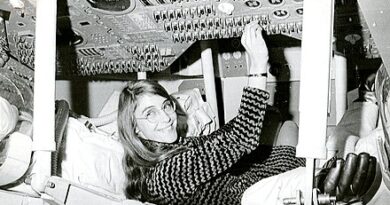 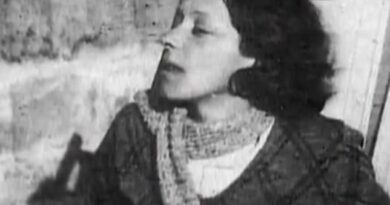